THE FUTURE ENTREPRENEURS OF AMERICA SCHOLARSHIP 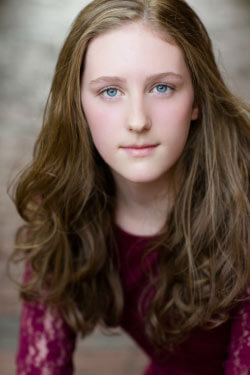 Audrey Larson is a teen actress and filmmaker. She is the Co-Founder of Fountain of Youth Productions (FYP), a youth film-making organization based in Massachusetts. Audrey has written, Co-Produced/Directed, and edited two short films with FYP; "Countdown" and "Drawing Inspiration". She has also edited promotional videos for The Binah School, Job Shadow TV, and Fountain of Youth Productions and a short documentary on Fair Trade. Audrey wrote, produced, and directed the short film "Camping Trip", which won a national gold medal at the Scholastic Art & Writing Awards and an audience award at the Cine Las Americas International Film Festival in Austin, TX. The film screens at six festivals across the U.S. including Newport Beach Film Festival and National Film Festival for Talented Youth. As an actress, Audrey has had roles in several films by her performing arts camp, two student films, and has also appeared as an extra in several independent films, a web-series, an HBO mini-series, and a German TV movie. Audrey also did the lead voice-over for a book trailer: One is Not a Lonely Number. She has trained privately with an acting coach, and attended workshops at Boston Casting, C.P. Casting and Wheelock Family Theatre. She studied on-camera acting at a summer intensive with the American Academy of Dramatic Arts in NYC. As a writer, Audrey has been published in Yaldah Magazine where she wrote and illustrated a fictional journal titled "Estie's Journal" and later "Travels with Simi" in each issue. Her short story, "Tornado Watch" is published in a youth writing anthology: Dancing with the Pen. Audrey's other passions include piano, antiques, ballet, and photography. Her dream is to one day travel around the world. In the fall, she will be attending NYU Tisch School of the Arts for film and TV production.

About The Future Entrepreneurs of America Scholarship:

Table Legs Online understands the high costs of pursuing higher education. Even with an early start, saving and budgeting for college can be difficult in this ever-changing economy. It's hard to predict costs, so they believe every bit of help matters. So with this in mind, the company presented The Future Entrepreneurs of America Scholarship in August of 2015. This scholarship awards innovative, forward-thinking students with a passion for business and entrepreneurship. To qualify, students are asked to write an essay answering three questions: In your opinion, what is it that makes someone an entrepreneur? In your opinion, what major characteristics do successful entrepreneurs exhibit, and why these characteristics? Describe your entrepreneurial experiences and why you would make a great future entrepreneur or business leader. Each year there will be two winners (one in the spring and one in the fall) that will be awarded $500 for books, living expenses, and other required fees. For more information on The Future Entrepreneurs of America Scholarship please visit: https://www.tablelegsonline.com/blog/press-release-the-future-entrepreneurs-of-america-scholarship/

Table Legs Online is an online retailer based in Baltimore, Maryland, providing quality table legs, furniture legs, table bases and tops, and accessories to commercial and residential customers. The company has been serving clients in the United States and Canada for more than 12 years. Call 877-220-3800 or visit them online at https://www.TableLegsOnline.com for more information.