Last week, a buddy of mine came across a video of a cool looking mobile tool box/workstation. He's a gear-head, and gets excited over the smallest of mechanical tweaks, so I didn't think anything of it before he showed me the video. This build really impressed me once I saw it in action. If you like innovative inventions, garage projects, or even just imaginative DIY, then read on!

Now before I get into detail, just try to imagine for a second: a large tool box, the kind of tool box / workbench you might buy at hardware stores made to be kept in garages. Now, put ATV wheels and tires, a steering wheel, and a seat on it to make it mobile (kind of like the one I crudely put together in Photoshop seen below). Weird right? I thought it was a solid idea, maybe something to be used in an industrial,not yet automated, setting. 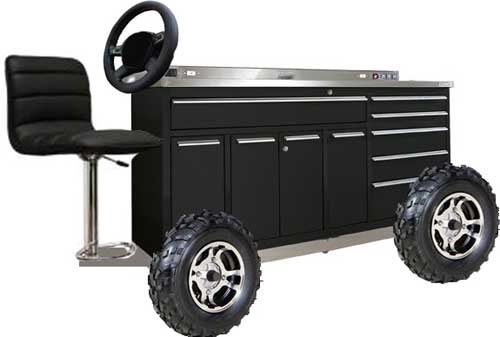 My crude interpretation of my buddy's description of the machine. Fancy right?

This is what I was kind of imagining when my gear-head buddy was explaining it to me. Well, wait until you see the real thing. Check out the video below for a real look at the monster build. [edit: video is unavailable, we have replaced it with the following image] 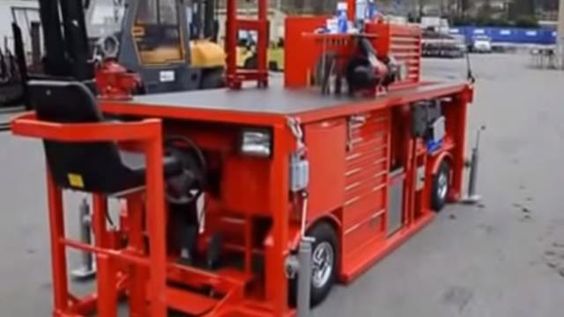 Now before you go out and try to buy one of these innovative modern creations, unfortunately it was a one-time, one-of-a-kind build. According to Brad Porcellato, it took him and his team 1,000 total hours and a budget of $4,500 to create this beautiful monster!

And don't try to buy this one off of him, because like Frankenstein's monster, it's not for sale. He was once offered $50,000CDN (that's roughly $37,900 US dollars) and turned it down.

To build his creation, no plans were used. Brad says "It was scratch built without plans, starting with a 2x3in 1/8th wall tube frame. I had tool boxes all over the shop and decided to incorporate them into a work station. Everything you need is in one spot. Work stations increase productivity. We used a 48 Volt CC drive train / steering rack etc."