The idea of "doing it yourself" may seem like an appealing one when you are trying to save money while keeping your home or property together, but it can also present unforeseen challenges. If you're not prepared to tackle those challenges, you could end up making the situation even worse. 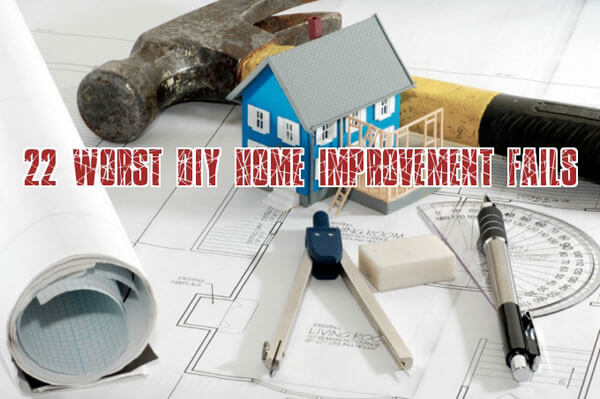 When someone is around with a camera to capture those situations, things can quickly go from bad to humiliating. That's what the individuals behind these 22 Worst DIY Home Improvement Fails have found out thanks to the power of the web. Let's have a look!

1. Toilet Mis-measurement There's nothing more frustrating than finding out only after the fact that you've completely botched your measurements. Of course, no mistake is unfixable as the person behind this DIY home repair can attest. While the "fix" would still require one to sit with legs hanging off to the side, it gets the job done. 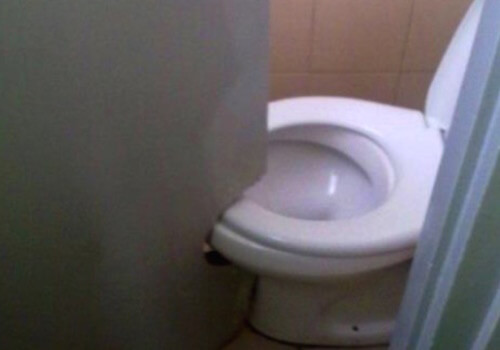 2. Passing Switches It's hard to conceive of a world where this "fix" would make sense. Unfortunately, the picture is missing the curiosity of what happens when both switches are turned on or off at the same time? At the least, you think these could have been placed side-by-side without overlap, but hey, this wasn't the work of a home improvement pro. 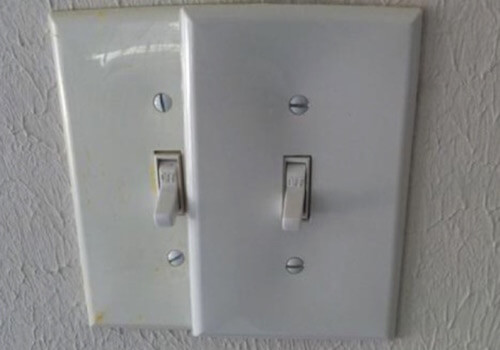 3. Driveway DIY Fail Slope. It's a wonderful thing. It's also something the contractor, who poured this driveway, failed to realize. Not pictured here: the scratched paint of all cars coming and going. 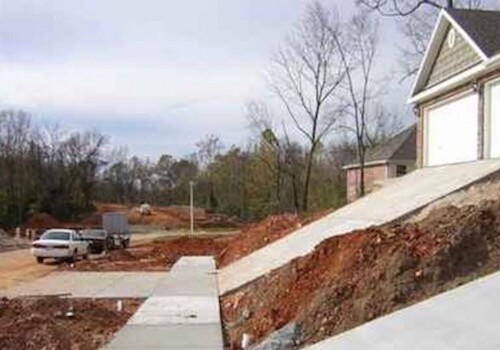 Image link: RecRealtor [edit: they have since deleted that article]

4. Inverted Toilet Seat Guys, this is one toilet seat that she won't mind you leaving up. This has to be one of the funniest home improvement fails for the bathroom we've personally EVER seen! This is low bid contractor work at it's absolute best. 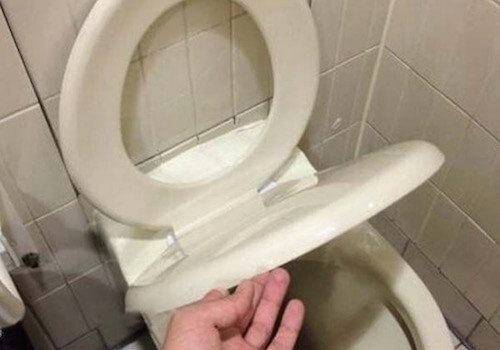 Image link: RecRealtor [edit: they have since deleted that article]

5. Wire Doorbell Something tells us the homeowner behind this doorbell fix isn't the type that appreciates company. We have no idea what might happen if you do touch those wires together, but hopefully, you'll be grounded when you try it. (Or better yet, you won't try it at all.) 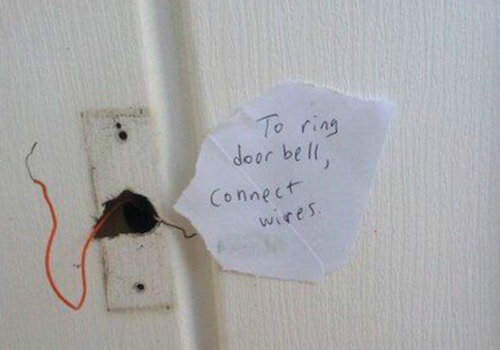 6. DIY Tree Removal Service This YouTube video starts harmlessly enough with the videographer filming his neighbors removing a rather large tree from their property. Unfortunately for the house, no one explained to them the concept of directional awareness. Warning: the result is pre-cursored by a NSFW slip of the tongue, but no worries: it's just as funny on mute.

7. Chimney Room The installation of this chimney could have used the guidance of a professional. Not that it looks poorly done, but the last we checked, you're not supposed to actually be able to see the brickwork inside the house through an open window. It also does little for the scenic appeal if a good view is what you're chasing. 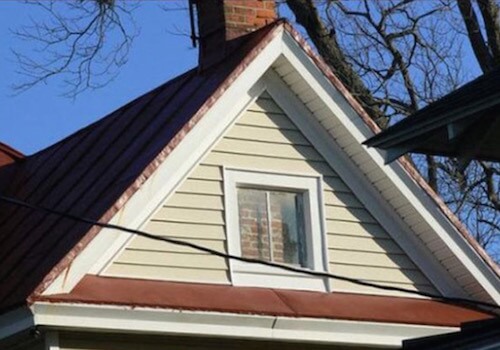 8. Inappropriate Doorstopper Welcome to the Hotel California, where you can check out any time you like but "¦ you now the rest. We have to admit, though, we're curious as to what's inside that room. The home improvement fail score here is here! 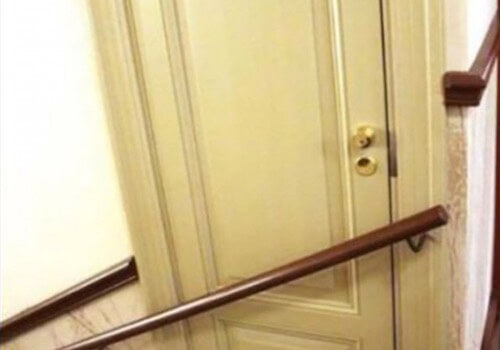 9. Faucet Plugin We're not sure this is how an electrician would have done it, but suppose all would be well as long as the genius behind it is extremely careful when using. It's never a good sign when you need a fire marshal to plug in your appliances, but in this case, we would definitely suggest it. 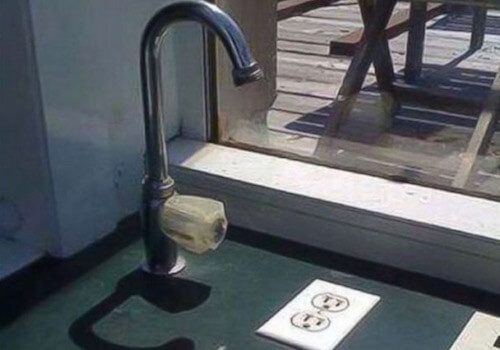 10. Staircase Fail It may not be fair to characterize this as a complete DIY home improvement disaster. After all, you can still get up and down, but it's going to take a little work, particularly with a sidestep and waist censure. We're assuming this is a house or duplex since public buildings usually have tight enough codes to prevent this sort of thing, but you never know. 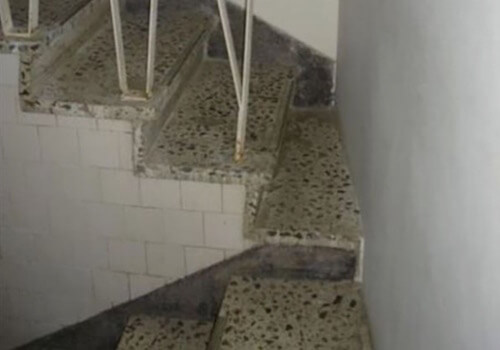 11. Drunken Shower Stall Say what you want about so-called "redneck ingenuity," but in this case, it works. This pic was originally a submission to The Chive and its look at "redneck innovation." Of course, this is one of those fixes that may seem more complicated than it's worth, but it's good to know in case you ever need to shower and your faucet head is busted. 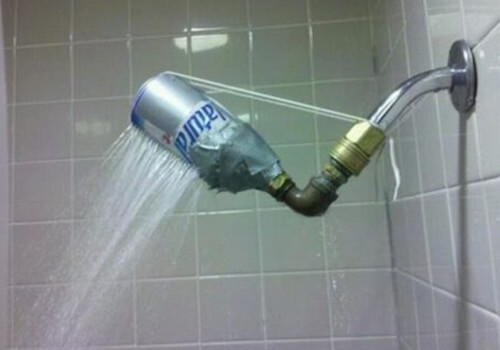 12. Kitchen Design Fail In this YouTube video, a homeowner is forced to deal with the frustration of faulty cabinetry. After trying to wrap our brains around it, we're not sure how he's ever going to get the cabinet door open the drawer, maybe. It looks like the only clear winner in this situation is the oven door.

13. Broken Refrigerator Another submission from The Chive that celebrates the wonders of "redneck innovation," the genius behind this home improvement fail realized that he had to keep the food cold somehow. Why not hook up the window unit? 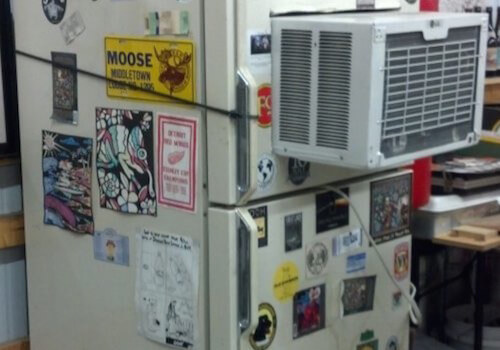 14. Faulty Runoff This photo is like an outside version of the faucet plugin (see No. 9), but unlike that previous entry, you really don't have the option of avoidance here. Whenever a big rain comes, you are directly positioned for disaster. 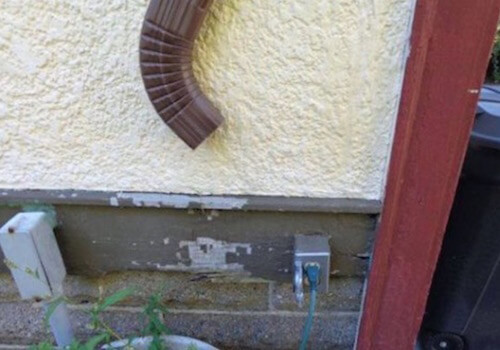 15. Security Fail Security gates how will one ever get past such an impenetrable defense? Answer, revealed! 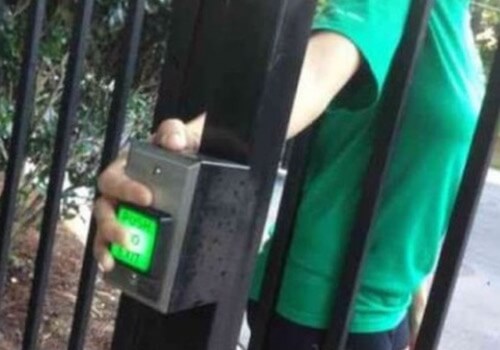 16. Kitchen Design Fail Part 2 This is what happens when you allow the designer from No. 12 on our list of DIY home improvement disasters to build out the rest of the kitchen. While it isn't impossible to use your fridge or pantry or microwave in this scenario, you definitely need a planning session before you start swinging doors open. 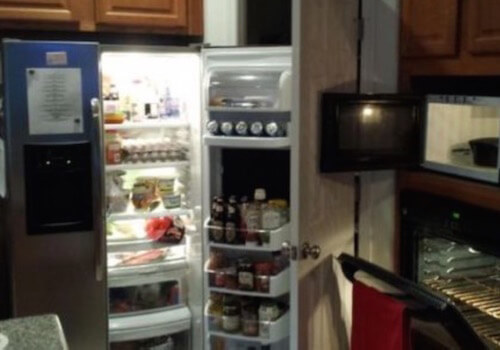 17. Ceiling Fan Misplacement What we wouldn't give to watch this thing on high for a few seconds. There's either going to be a lot of thump-thump-thumping or that support beam is coming down. Whatever the case, this wasn't well thought out. 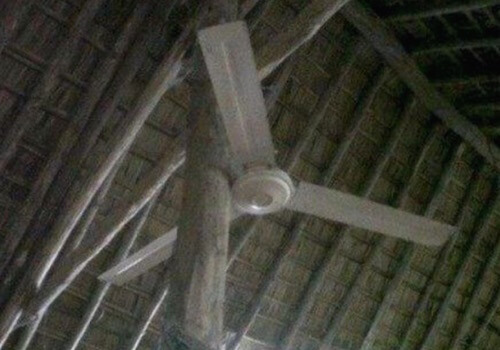 18. Dueling Drawers Every professional cabinetry person has to start somewhere. Welcome to this one's first job! While the drawers here look finely crafted enough, it's the placement that presents a clear problem. Suggestion: do not keep things you really need at the back or else you'll never see them again. 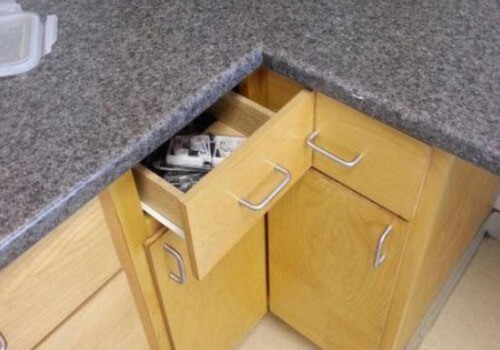 19. Ceiling Fan Fail (Or Win?) Our first instinct was to label this as a clear fail, but the longer we looked at it, the more we admired the determination and grit behind whoever came up with it. Sure, it's not as good as an actual ceiling fan and a clear eyesore, but wow, that's a lot of tape! 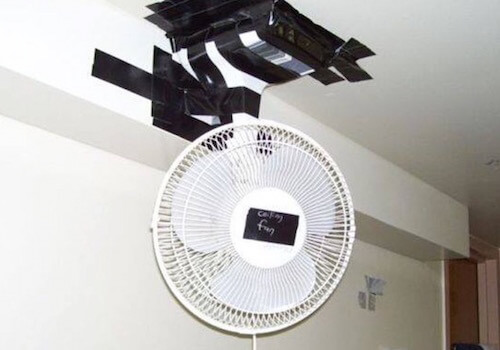 Image link: Instagram [edit: this image has since been deleted]

20. Hair Dryer Wiring Problems In this YouTube video, a DIY home repairer manages to accidentally find an interesting new use of his wife's hairdryer. Any more than that would ruin the surprise. Not sure if they ever got it straightened out, but she at least got a good laugh out of it. We did, too!

21. Bringing Down the HouseYet another YouTube video here this one shows the folly of a man, who doesn't understand the concept of support beams and pays a scary price in the process.

22. Heavy Equipment Operator Fail This selection from Jukin Video captures the moment when a would-be heavy equipment operator decides that he's going to do a little earth moving on his property without realizing the effects of weight limits.

Video link: YouTube [edit: this video has since been made unavailable]

The next time you decide to take on a quick fix around the house you're uncertain about, remember these DIY home improvement fails featured here courtesy of Table Legs Online. And if you're still brave enough to proceed, good luck! What did you think about these selections? Are they really the worst? Sound off in the comments section!

Finally, if you enjoyed the above "DIY home improvement fails", check out our expert roundup of  Top 11 Home Upgrades that Pay Off (+Bonus Tips).